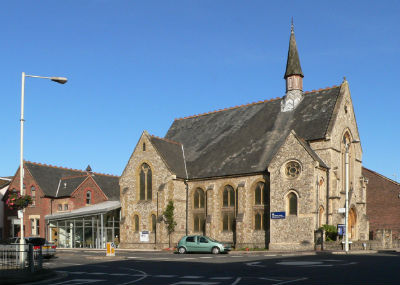 We celebrated the centenary of our Church Building in 1991. The following is an account of its beginnings, written for the centenary by the minister of the time, Reverend Anthony C. Gardiner, with the aid of Jack Barrett, based in large part on original research by Gillian Peskett.

The origins of the United Reformed Church in Havant go back to the very beginnings of "Nonconformity" in the town. With the restoration of the Stuart monarchy, and the passing of the Act of Uniformity in 1662, many ministers of the Established Church dissented from, and refused to conform with, the doctrines and disciplines then imposed, and resigned, or were "ejected" from their livings. Among them was the Rector of Warblington, the Rev. John Harrison, who, despite the penalties imposed, continued to preach. The State Papers for 1670 record that "John Harrison and others continue their assemblies, refuse to discontinue and are willing to accept the penalties". In 1672, during Charles II's brief flirtation with religious toleration - the "Declaration of Indulgence" - Harrison applied for a licence to be a Presbyterian teacher at Havant "in the house of Thomas Bayly", and this was granted. A similar licence was granted to Thomas Ridge of Hayling Island in the house of Thomas Miller, and there were many more across the country.

1689, and the passing of the Act of Toleration, brought many changes. At last, Nonconformists could worship according to their consciences without fear of legal retribution. In 1690, a certain Charles Nicholas was licensed and, in 1693, on the burial of his son, Antipas, in St. Faith's churchyard, was described as a preacher at ye conventicle". Odd, scattered comments are our only sources of information for the next few years. For example, "Mr. Nicholetts (Nicholas) of Havant hath a small maintenance" - no doubt the reason why the gentleman was voted £5 from the congressional fund in 1696! A little later it was stated that Havant lacked a minister, and was able to raise £50 to £60 a year. By 1715, the year of the first Jacobite rebellion, the pastor was J. Bouchier, succeeded by a Mr. Loveder, under whose leadership the number of "hearers" averaged 200.

The date of the foundation of our fellowship has traditionally been regarded and is still observed as 1710, and though there are no documents to explain that date it seems probable that it marked the coming together of a progressive Christian community. Progressive they certainly were, for, within eighteen years they had built and opened for worship a large chapel in The Pallant. They styled themselves as "Protestant Dissenting Congregation" - and, later, "Independents".

The original licence for the building, issued from Winchester, bears the date October 14th, 1729. Over the door ran the following inscription: "A Temple dedicated to Divine Worship when sacred Liberty was flourishing under the rule of George Augustus". The original was in Latin and, strangely, gave the date as 1718 - someone, it seems, having inadvertently missed out an "X" (as well as a letter from the Latin word for "dedicated"!) That building was to serve the cause well for 160 years, including the 43 year pastorate of the Rev. William Scamp - surely an exquisite name for a minister! By the late 1880's, though, it had quite clearly outlived its usefulness, despite extensive renovation work during the early years of the ministry of Rev. J. Llewellyn (1863-75), when the chapel was re-pewed, the old high back seats and stone-paved aisles disappearing.

An article in The Christian Citizen for June 1890 comments on the plans made to erect a new church in North Street:

'In 1882, the present pastor, Rev. R.J. Wells, commenced his ministry. Under the divine blessing since then, the Church has steadily and increasingly flourished. In the earlier years of the present pastorate, necessary repairs at some small outlay were carried out - later a new organ at a cost of considerably above £200 was purchased, and the debt incurred speedily cleared off. Special popular services for the people have for six years, during the winter months, been held on alternate Sunday Evenings, and have been attended by crowded congregations; just upon one hundred have been admitted into church fellowship, and the present roll of active members numbers 108.

In consequence of the old chapel having become greatly out of repair and inadequate in size to meet the present needs of the congregation, and as both it and the Sunday school now occupy very remote positions, it was decided toward the close of last year to erect a new Chapel and School in the main street.'

That "new chapel", our present building, was opened for worship on 26th May, 1891. Since that day, it has served well a living, thriving Christian community, in times of sorrow and joy, war and peace, hardship and prosperity - its very atmosphere is evocative of the prayer and praise, the hopes and fears and longings, of countless faithful people. Of course, over the years much has changed, and rightly so. We have changed our name yet again - this time from Congregational to United Reformed, in 1972. We no longer cling, as ferociously as did our forefathers, to what they called "The Principles of Free Churchmanship". We have learned a new informality, a new freedom in worship and community, that would have amazed those Congregationalists of a hundred years ago. But one thing does remain constant: the commitment of the people of this church to the Gospel of Jesus Christ, and their endeavour to understand that Gospel afresh, and to work out its implications anew, in each new age.